ONE OF A KIND
A Tribute to Katharine Hepburn 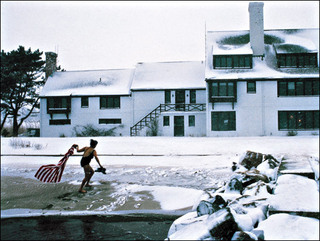 Hepburn in her eighties, after an icy swim
Photo ©John Bryson

In my favorite John Bryson photograph, Katharine Hepburn is coming out of the icy surf of Long Island Sound on a bitterly cold day in February, running toward Fenwick, her beloved family home. All we see is her back, but we can tell she's fit and hardy, this octogenarian, fresh from her daily swim and waving her towel like a flag.

In her early years she looked as ravishing as Garbo, all cheekbones and lithe movement. An athlete, she was still in peak form at the age of 45, when she golfed, biked, swam and boxed her way through Pat and Mike. As she aged and weathered, as her hands and head began to shake with palsy, she worked these elements into her roles. After she jumped into a Venice canal for a stunt in Summertime and contracted incurable conjunctivitis, she used her perpetually watering eyes to sentimental advantage in Guess Who's Coming to Dinner? and On Golden Pond. Within a year of getting a hip replaced, she made a movie on horseback with John Wayne, who had just lost a lung. They were both 68, both wounded, yet each still tried to upstage the other. Hepburn was fighting for the role of preeminent actress of the century--as if there was any question.

She had only a few friends when she was growing up and, in all the world, was closest to her older brother, Tom. They lived in a tumultuous house with four younger siblings, a mother who was a prominent feminist-- she helped found the organizations that became Planned Parenthood and the League of Women Voters-- and a dominating father who was a surgical pioneer in urology. The Hepburn parents battled social problems that most people in the early part of this century didn't even talk about, and the Hepburn children discussed venereal disease and prostitution and birth control at the kitchen table. But for all their liberal ways, the Hepburn parents believed in physical discipline. "Were we spanked?" Hepburn once said with pride. "Beaten."

When she was 13, she found Tom's body hanging from the rafters in his godmother's house in New York City, where the children had been spending a vacation. It was a tragedy that changed her life completely. "It was as if, when Tom died, I sort of became two people instead of one-- a boy and a girl...."

She created in films and theater a fresh new image for women--outspoken, ambitious, smart and equal, or nearly equal, to men. Even a confection like Desk Set with Spencer Tracy can be seen as revolutionary: She makes a middle-aged, single, superintelligent research librarian into a funny, sexy leader. And yet her mother, the feminist, didn't see her as a feminist at all; her mother thought films were "silly" and showed little interest in Katharine's work until she performed Shakespeare and Shaw onstage.

Hepburn was nominated for 12 Best Actress Oscars and won four, but she never attended the Academy Awards as a nominee. In fact, she was indifferent to most of the rewards of celebrity, hated to walk down the street, refused to give autographs and once, in a car surrounded by fans, commanded the chauffeur: "Drive on. We'll sweep up the blood later!" That boldness, confidence and imperiousness had been in evidence ever since her first screen test, which she performed with her back to the camera.

On sets, Hepburn preferred the company of the crew and her producers and directors to that of other actors. "My father always advised an impersonal relationship with fellow workers," she said-- a rule of thumb adopted by this dutiful daughter from a faraway time. The exception was Spencer Tracy. She adored his talent, his humor and his domineering, even cruel style, and she loved sparring with him. "A reasonable facsimile of Dad," one of her brothers observed. She tailored her movie schedule, her ambitions, her personality and her clothes to suit Tracy. It was after she met him that she began wearing elegant pantsuits, for instance, instead of torn khakis. In 1962, after she filmed Long Day's Journey Into Night, she dropped out of the business for five years to devote herself to nursing him; the two disappeared, though they could be spotted from time to time flying kites in the canyons of Los Angeles. She talked him into one last movie, Guess Who's Coming to Dinner? and played many of her scenes to an empty wall so he could rest. For the length of their 27-year relationship, Tracy lived alone, but at the end, when he was clearly dying, Hepburn slept in the maid's room of his house.

The only other people she adored unquestioningly were her parents, and she stayed her parents' child her whole life. After she became a star, she sent all her money home to be invested by her father, who gave her an allowance. She never bought a house in California, though she lived most of her life there. When she was on the East Coast, she went to her family's home every weekend, and when she was on location, she propped pictures of her mother and father by her bedside. She never had children of her own. "I would have made a terrible parent," she said once. "The first time my child didn't do what I wanted, I'd kill him."

The Hepburns had always refused to talk about their son Tom after his death. In a house in which anything else could be discussed, the family suicides-- and there were others, including those of Hepburn's grandfather and three uncles-- were taboo. But Katharine forgave her parents their silence. "They moved on into life," she explained. "They simply did not believe in moaning about anything." As for herself, she only wondered: Had Tom told her, the evening before, that she was his favorite girl, or had she fantasized it?

The one thing Katharine Hepburn ever did against her parents' wishes was become an actress. Her mother was indifferent, her father "disgusted and heartsick" at her decision, Hepburn remembered-- "thought it a silly profession closely allied to streetwalking." And perhaps this is why she outdid herself: coming earlier and staying later than anyone else on the set, the fiercest competitor, the consummate professional who knew everybody's jobs better than they, who could step into roles with a weekend's notice, who performed on film, stage and television, in comedies, tragedies and musicals, winning more awards than anyone, outlasting generations of actors-- an original, with the heart and soul of a reckless and boyish girl, always poised to stride off into the sunset, trousers flapping, showing us her beautiful and eloquent back.

©Life magazine, 2003. Thanks to John Bryson's estate for the use of his photo and to Life Books for permission to excerpt the text. 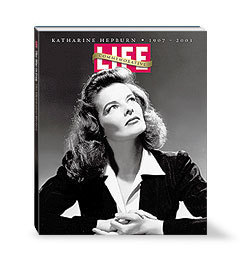